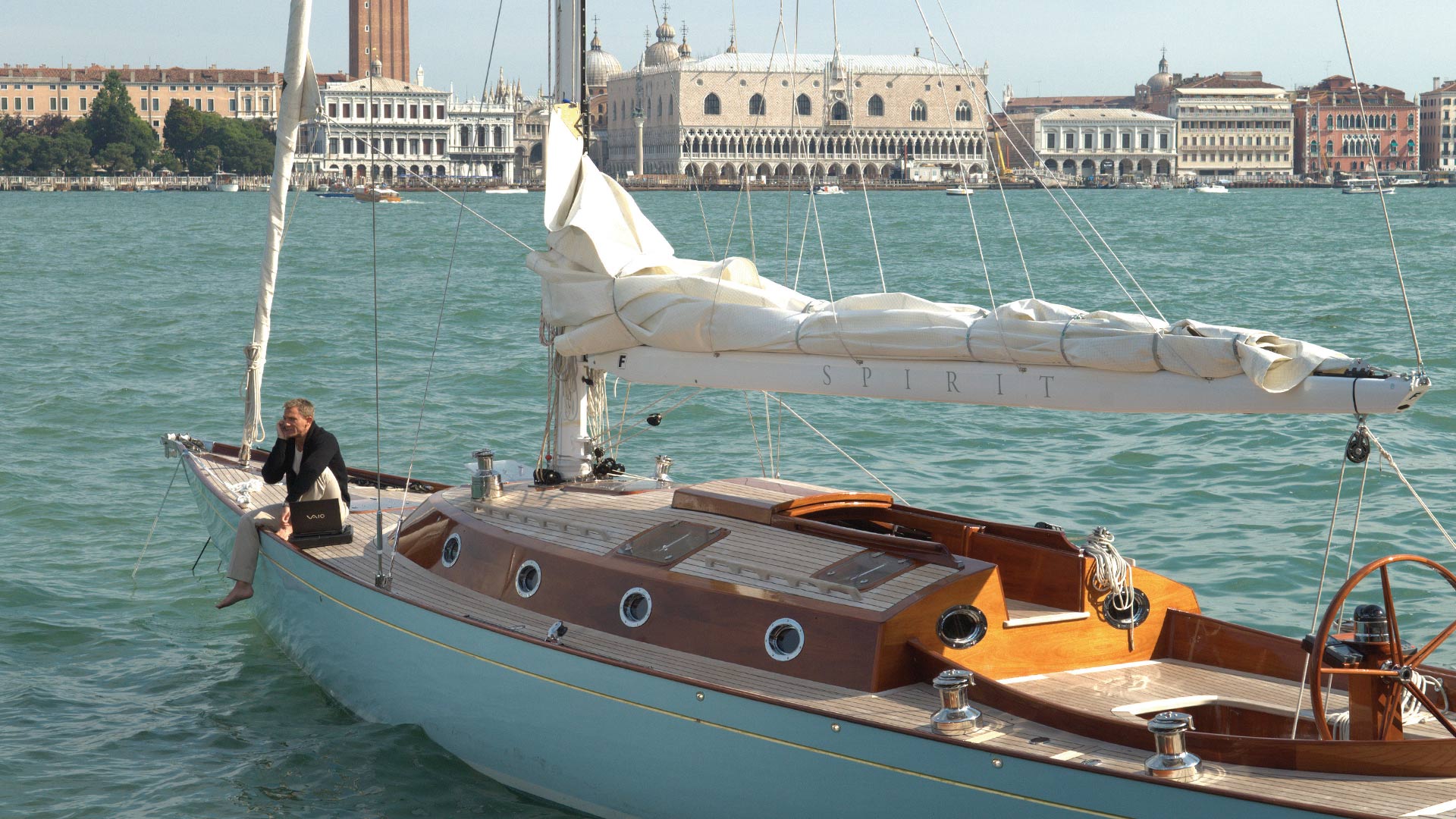 As a Royal Navy Commander, James Bond is never far away from near the sea. All the Bond movies’ boats are not full of Q’s gadgets and secret weapons.

Some are very high-end, while others are more modest. Some are speedboats used in thrilling chases. Others are super sleek boats where the drama and actions occur.

Here is our James Bond boat selection to experience the lifestyle without the danger.

One of the most memorable boat chases occurs in From Russia With Love. A young Sean Connery and Tatiana Romanova were traveling to Venice when the bad guys assaulted them. But Bond made a spectacular escape aboard a Fairey Huntress.

The speedboat is part of the Fairey Marine catalog. Created by English sailing enthusiasts, the company produced boats until the early 1980s. Its first motor cruiser appeared in the 1960s.

This James Bond boat sequence helps publicize the Fairey Huntress and the Fairey Huntsman motorboats. They became widely popular, and won multiple offshore races. They were the craft of choice for Royal Naval Skippers.

The Glastron GT150 featured on Live and Let Die movie poster is crucial for the 007 boat history. Roger Moore drives the speedboat through Louisiana everglades and makes a 120ft leap over the pursuing Sheriff’s cars.

26 boats were used to create this iconic sequence, and 17 were destroyed during the shoot!

The Glastron GT 150 used to establish the world record was sold just after the shooting. It is now the property of the Ian Flemming Foundation, and it was part of James Bond’s vehicle exhibition in London.

For safety reasons, we don’t recommend these kinds of stunts with speedboats while you are on sailing vacations. But you can still experience high-speed sensation and jumps with water toys. Learn how to choose among them here!

In this Bond movie, the boat is, in reality, a Lotus Esprit. This beautiful white car is one of the best British sports cars of the 1970s. Q turned it in an incredible vehicle. It turns into a submarine to escape an attacking helicopter.

Filmed in the Bahamas (Nassau), the underwater scenes feature the extravagant vehicle that can fire torpedoes and anti-aircraft-missiles.

Enjoy a superyacht charter in the Bahamas to immerse yourself in the James Bond movie ambiance.

The Manticore yacht is the villain’s lair seen in GoldenEye. Most of the scenes were filmed in Monaco. The actual luxury yacht is the Northern Cross, a 142ft boat built in Sweden in 1991.

Designed by Tor Hinders and Per Kavli, the motorboat has a top speed of 24 knots and a cruising speed of 18 knots. The accommodation is designed to sleep up to 10 guests over five cabins.

The crew cabins accommodate up to 8 people. It was the property of a Finnish businessman before it was refurbished and sold for $7 million in 2006.

Check our Yacht available for charter in the French Riviera and cruise to Monaco to experience James Bond’s universe glamour.

Driven down the Thames at 60mph, the motor yacht is wiped out by mini-torpedos. The Superhawk 34 used in The World is Not Enough was for sale in January 2012 for $150,000.

After this film, the collaboration between the film producers (EON Productions) and the boat company becomes more notable.

Sunseeker is a major boat builder for the sports and leisure markets in the world. The James Bond franchise helped the British luxury brand to become an international icon.

Try our Sunseeker Superyacht for a taste of James Bond lifestyle.

In the 2006 James Bond film, several luxury yachts appeared. Among them, there are the Sunseeker Predator 108 and Spirit 54.

The Sunseeker superyacht is the villain’s “floating lair.” It was filmed on location in the Bahamas. With over 100 feet long, the performance yacht has four cabins, one master suite, and it can accommodate up to eight guests.

Full-scale models of accommodation on board were built for the film studios in Prague.

The large-scale sets were mounted on a large hydraulic platform to simulate the movement of the sea during filming.

Daniel Craig and Eva Green also sail casually into Venice on the elegant Spirit 54. This classic British 54-foot yacht was handcrafted in Suffolk by Spirit Yachts. She sleeps up to six guests in two en suite double cabins.

It has to be shipped to Miami, then Barbados and Croatia before finally arriving in Venice. It is also the first sailing yacht to go up the Grand Canal in over 300 years.

After the shoot, the luxury boat was used for cruising and racing, mainly in the UK and Ireland.

The actual superyacht is a 183-ft schooner built in Turkey by Pruva Yachting in 2011.

Regina has a maximum speed of 12 knots, and she can accommodate 12 guests in two master suites, two double staterooms and two twin cabins plus nine crew.

Fun fact: the shower scene which is supposed to take place aboard, was filmed in room 712 of the Four Seasons Hotel at Canary Wharf in London.

In No Time To Die, released in 2021, the 007 yacht is called Spirit 46. She is a very beautiful 14m sailing yacht that is initially designed for fast-pace racing. Clearly a true match for an adventurer such as James Bond.

In 2021, it seems that James Bond is going back to its old love from the Casino Royale time, the modern yet classic wooden sailing yacht.

Although our article is intended to list the yachts that have been featured in a James Bond movie, you might also encounter boats that were named with one of the James Bond movies, without actually being a part of the movie.

John Staluppi is the most emblematic case of a James Bond fan that decided to show his passion through the naming of its yachts. As such, he named all of the 18 yachts that he owned over his life after James Bond movies.

Like James Bond, John Staluppi likes his yachts fast. To be more precise, he likes them unusually fast compared to their respective size.

One of his most famous posessions include yachts called :

It seems that John Staluppi, like many of us, made the realisation that sailing a yacht truly makes you feel like you are part of a James Bond movie. Luckily, your yacht doesn’t have to be featured in a Hollywood movie or to bear its name for you to feel that way.

Experience the James Bond lifestyle (without the all the fighting).

Which yacht was featured in the James Bond “From Russia With Love” (1963)?

The yacht featured in the James Bond “From Russia with Love” released in 1963 was a Fairey Huntress from the Fairey Marine shipyard.

The yacht displayed in the James Bond “Golden Eyes” is the Northern Cross, a 142ft yacht built by the swedish shipyard Marinteknik Verkstads AB.

Which yacht appears in the James Bond “The world is not enough” (1999)?

The yacht featured in “The world is not enough” is a Sunseeker Superhawk 34.

Which are the yachts featured in James Bond “Casino Royale” (2006)?

Two yachts appear in the James Bond “Casino Royale” movie released in 2006: the Sunseeker Predator 108 and the Spirit 54.

The yacht featured in Skyfall is Regina, a 183ft superyacht built in Turkey by Pruva Yachting.

The yacht featured in the new James Bond “No Time to Die” is the Spirit 46, a sailing yacht developped by Spirit Yachts.

John Staluppi owns or used to own many of the yachts that were named after James Bond movies such as: Skyfall, Diamonds Are Forever, For Your Eyes Only or Octopussy.

Who owns the yacht “Skyfall”?

Roy E Carroll is the owner of the Yacht Skyfall, which was originally built for John Staluppi.

Who owns the yacht “Octopussy”?

The original owner of the yacht Octopussy was John Staluppi. They yacht was sold in 2021 in an in-house deal by Moran Yacht & Ship.

Who owns the yacht “Diamonds Are Forever”?

John Staluppi is the owner of the yacht “Diamonds Are Forever”.

Who owns the yacht “Casino Royale”?

John Staluppi is the original owner of the yacht “Casino Royale”, named after a James Bond movie like all of his yachts.

The Bahamas vs Caribbean: Which Is Better for A Beach Vacation? 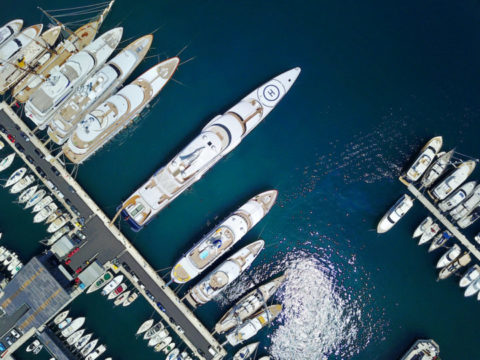 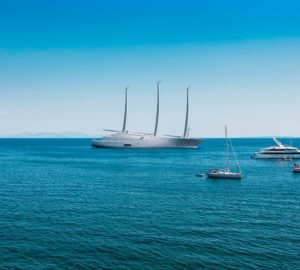