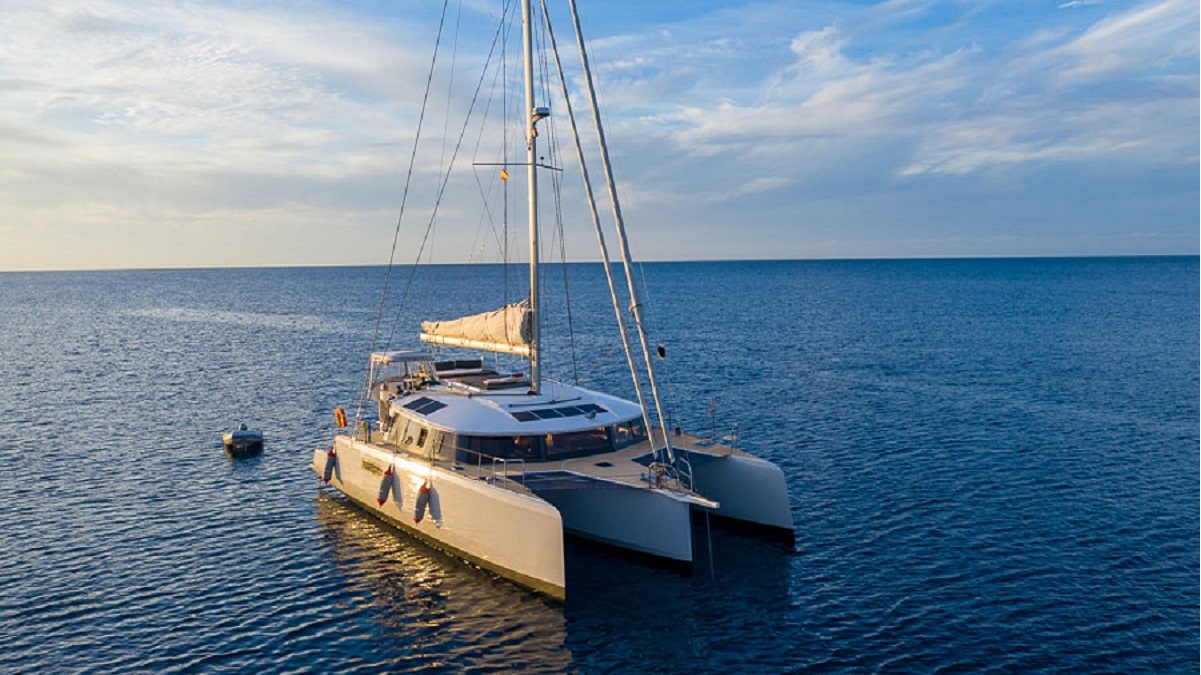 Since they both have more than one hull, the trimaran and the catamaran are known as multihulls in the market. A catamaran has two hulls that are of similar size, but a trimaran has two outriggers and one main hull.

But what are the fundamental distinctions between Trimarans and Catamarans?

What is a trimaran?

The main difference between a catamaran and a trimaran is the hull. With a twin hull, the cat has a classic, simpler, and sleeker shape. However, the trimaran’s three hulls provide excellent stability, similar to the little wheels added to a bicycle. The form of the floats makes the recreational trimarans especially stable and comfortable to sail even in rough waves.

A trimaran is a multihull vessel with small outrigger hulls connected to the main hull with a unique design that sets it apart from other boats. Some say it looks like a spaceship. However, there are a few more distinctions to be made.

Since a trimaran has three hulls: two overhanging hulls and one main hull, they are thought to be unsinkable. Even in the most brutal storms, they do not capsize, and even if they do, they manage to stay afloat.

A trimaran’s fundamental disadvantage is that in order to stay afloat, it combines the comfort of a monohull boat and sailing capacity with the safety of a multihull boat.

All about Neel trimaran here

What is a catamaran?

Catamarans are a unique type of vessel. They are also known as cats, which represents a hint to their flexibility. These boats are a lot of fun to sail and provide comfort. They may range in size from a few two-person cabins to a large group of 20.

While many catamarans are reasonably priced and suited for families, others provide additional luxury and can sail to some of the most expensive and beautiful destinations in the Caribbean and Mediterranean. Finally, while catamarans are stable ships, they are best suited for sailing in calm sea gulfs, lagoons, or shallow waters.

All our catamarans & trimarans for charter here

Trimaran vs. Catamaran: which one has the largest surface area

Varied living spaces have different surface areas. Catamarans have filled the world’s oceans in recent years with more huge and luxury versions, including sailing catamarans like the Lagoon Seventy 7, Fountaine Pajot’s Allegria 67, and motor catamarans like the Sunreef Power 70. Catamarans are well-known for their large living quarters, which are divided between the two hulls and the central platform.

The modern catamaran exterior, which measures around 40 feet (12.2 meters) in length, was produced in the 1950s. Initial catamarans had difficulty coming around when riding      windward, but later modifications resolved this issue. Compared to a catamaran, a trimaran is substantially more stable.

The highest righting moment on a catamaran occurs at 12° heeling, as indicated on the stability curve. When seafaring in rough seas and strong gusts, this position is rather easy to achieve.

Among some of the cruising, habitable trimarans, we have the Swing Wing system in The DragonFly, which has a comfortable interior, or the Rapido Trimaran, created in Vietnam by the Morrelli & Melvin designer firm.

Finally, the Naval NEEL shipyard trimarans stand out because they feature a living area above the central hull called the “Cockloon,” which makes them seem like floating hotels. It creates a continuous space between the cockpit and the saloon. The cabins are the only ones that get to use the floats. As a result, the boat has a central kitchen, a panoramic view saloon, and cabins on the same level as the lounge. The flybridge also has a huge surface area.

Trimaran vs. Catamaran: Stability and Performance

The hull is the major distinction between a catamaran and a trimaran. The cat has a classic, simpler, and sleeker design with a double hull.

A trimaran, on the other hand, is a multihull boat with tiny outrigger hulls connected to the main hull with an innovative design that stands out among other boats. It resembles a spaceship to some. There are, however, some additional distinctions.

Trimarans are made up of three hulls: one main hull and two overhanging hulls. Trimarans are unsinkable as a result of this science. Trimarans do not capsize even in the most severe storms, and even if they do flip over, they manage to stay afloat. The main disadvantage of a trimaran is that it combines the sailing capacity and comfort of a monohull boat with the security of a multihull boat in order to stay afloat. Trimarans are also among the quickest boats available. They can be chartered as well as used as racing yachts.

Catamarans are fascinating vessels. These boats are pleasant to sail and offer a high level of comfort. They may vary in size from a few cabins that can fit two people to a huge group of 20. While many catamarans are reasonably priced and fitted for families, others offer extra luxury and can sail to some of the most stunning and expensive sites in the Mediterranean and Caribbean. Finally, while catamarans are excellent yachts for stability, they are most suitable to sail in calm sea gulfs, lagoons, and shallow waters.

The fundamental difference between these two multihulls is a trimaran’s extra hull versus a catamaran’s. The qualities that separate one multihull from another are more difficult to recognise if everyone can distinguish a multihull from a monohull. Multihulls have more stability than monohulls.

The wind speed pushes the sailboat ahead and causes it to bend forward in one path. The keel under the hull prevents the ballast from capsizing and the yacht from wandering in monohulls. Therefore, a monohull will last longer in heavy winds.

On the other hand, multihulls benefit from their floats, which can endure submersion. The catamaran will provide serene navigation and, unlike the monohull, will not heel, although it may be uncomfortable in big seas.

You might be surprised to find out that Trimarans are extremely safe; in fact, many trimarans, are almost unsinkable. They have a core made up of foam, and the materials’ buoyancy is extremely high in comparison to the boat’s displacement. Trimarans are safe because of their breadth. The trimaran is the safest of the multihulls because of its three-hulled design, weight centering, and complete anti-drift scheme.

The trimaran is the sturdiest of the multihulls due to its weight centering, complete anti-drift scheme, and three-hulled design. There are substantial variances in righting torques between a trimaran and a catamaran.

Moreover, even if the trimaran were to overturn, the structure would keep it from plummeting into the water, making it an extremely safe boat. Plus, multihulls are generally safe and easy to maneuver.

Catamarans are a safe way to travel the ocean. Offshore, catamarans are often far safer than monohulls of similar size. Enhanced resilience, speed, steadiness, and motion ease due to a lack of ballast all contribute to safety.

A large modern catamaran has an outstanding resilience and roll inertia. The mix of these factors makes invasion or capsizing extremely unlikely. When a 20-foot wave hits a catarmaran’s beam, the boat will just surf sideways.

Catamarans are recognized for their velocity, and some of them are capable of breaking world sailing records. Catamarans may travel at a pace  of 15 to 30 mph, with the best reaching speeds of well over 60 knots.

Cruising catamarans may reach high speeds of 15 knots, or 17.3 mph, on average (27.84 kph). In the right wind conditions; however, some outstanding racing catamarans can reach a pace of up to 30 knots.

On downwind runs, reaches, and broad reaches, catamarans are typically quicker than trimarans. Sailing a catamaran is less exhausting than sailing a trimaran. Sailing flat has a number of benefits. Carrying tanks and other diving equipment is significantly simpler on a cat if you are a SCUBA diver.

Catamarans are lighter than trimarans because they do not require a heavy keel. This, along with the fact that their sails are placed equivalent to the wind, allows them to sail quicker than trimarans, particularly on a run or broad reach.

Trimarans are frequently preferred in racing these days. When it comes to racing, trimarans are more popular than catamarans, especially in the previous decade or so.

For long offshore races, racing trimarans’ speed and safety qualities are significant benefits. Even in severe seas, they can be pushed harder and are more forgiving than other racing catamarans. These are the primary reasons why trimarans have become so popular in recent multihull competitions. Trimarans, for example, have won the Jules Verne Trophy every year since 2010.

Trimarans can often increase their monohull sailing speed on almost every point of sail      while cruising catamarans are usually 25-30 percent faster than a sailing monohull of the same length. Of course, when the boats are filled for cruising, these comparisons vary drastically.

A trimaran is more suited to sail upwind than a catamaran, which is more vulnerable to drifting. Trimarans are; therefore, quicker than catamarans, and this benefit is especially noticeable when cruising against the wind due to the weight centering in the middle hull, which lowers pitching.

The third hull really makes trimarans considerably quicker than any other hull form at a given extent based on the relation between a boat’s waterline length and speed i.e. that more hull distance in the water leads to higher speeds.

Which is Better: A Trimaran or a Catamaran?

All our catamarans & trimarans for charter here

If you want to spend less time on deck, a catamaran is a great option. Catamarans are also ideal for hosting gatherings and parties while maintaining their stability on the water.

A trimaran is a more ideal boat for you if you want to develop your sailing talents on something more difficult. Moreover, if you’re a speed demon, keep an eye out for the fastest trimaran boats and pick the one that best meets your needs.

While picking between a catamaran and a trimaran appears simple on paper, it becomes more challenging when you see them in front of you. Check out our page for more details in order to make a more informed decision.

What is a Yacht Club? What are its benefits?